26 In the sixth month the angel Gabriel was sent by God to a town in Galilee called Nazareth, 27to a virgin engaged to a man whose name was Joseph, of the house of David. The virgin’s name was Mary. 28And he came to her and said, ‘Greetings, favoured one! The Lord is with you.’ 29But she was much perplexed by his words and pondered what sort of greeting this might be. 30The angel said to her, ‘Do not be afraid, Mary, for you have found favour with God. 38Then Mary said, ‘Here am I, the servant of the Lord; let it be with me according to your word.’ Then the angel departed from her.

In those days a decree went out from Emperor Augustus that all the world should be registered. 2This was the first registration and was taken while Quirinius was governor of Syria. 3All went to their own towns to be registered. 4Joseph also went from the town of Nazareth in Galilee to Judea, to the city of David called Bethlehem, because he was descended from the house and family of David. 5He went to be registered with Mary, to whom he was engaged and who was expecting a child.

46 And Mary said,
‘My soul magnifies the Lord,
47   and my spirit rejoices in God my Saviour,
48 for he has looked with favour on the lowliness of his servant.
Surely, from now on all generations will call me blessed;
49 for the Mighty One has done great things for me,
and holy is his name.
50 His mercy is for those who fear him
from generation to generation.
51 He has shown strength with his arm;
he has scattered the proud in the thoughts of their hearts.
52 He has brought down the powerful from their thrones,
and lifted up the lowly;
53 he has filled the hungry with good things,
and sent the rich away empty.
54 He has helped his servant Israel,
in remembrance of his mercy,
55 according to the promise he made to our ancestors,
to Abraham and to his descendants for ever.’

56 And Mary remained with her for about three months and then returned to her home.

5He went to be registered with Mary, to whom he was engaged and who was expecting a child. 6While they were there, the time came for her to deliver her child. 7And she gave birth to her firstborn son and wrapped him in bands of cloth, and laid him in a manger, because there was no place for them in the inn.

8 In that region there were shepherds living in the fields, keeping watch over their flock by night. 9Then an angel of the Lord stood before them, and the glory of the Lord shone around them, and they were terrified. 10But the angel said to them, ‘Do not be afraid; for see—I am bringing you good news of great joy for all the people: 11to you is born this day in the city of David a Saviour, who is the Messiah, the Lord. 12This will be a sign for you: you will find a child wrapped in bands of cloth and lying in a manger.’

16So they went with haste and found Mary and Joseph, and the child lying in the manger. 17When they saw this, they made known what had been told them about this child; 18and all who heard it were amazed at what the shepherds told them. 19But Mary treasured all these words and pondered them in her heart. 20The shepherds returned, glorifying and praising God for all they had heard and seen, as it had been told them.

In the time of King Herod, after Jesus was born in Bethlehem of Judea, wise men from the East came to Jerusalem, 2asking, ‘Where is the child who has been born king of the Jews? For we observed his star at its rising, and have come to pay him homage.’ 3When King Herod heard this, he was frightened, and all Jerusalem with him; 4and calling together all the chief priests and scribes of the people, he inquired of them where the Messiah was to be born. 5They told him, ‘In Bethlehem of Judea; for so it has been written by the prophet:
6 “And you, Bethlehem, in the land of Judah,
are by no means least among the rulers of Judah;
for from you shall come a ruler
who is to shepherd my people Israel.” ’

7 Then Herod secretly called for the wise men and learned from them the exact time when the star had appeared. 8Then he sent them to Bethlehem, saying, ‘Go and search diligently for the child; and when you have found him, bring me word so that I may also go and pay him homage.’ 9When they had heard the king, they set out; and there, ahead of them, went the star that they had seen at its rising, until it stopped over the place where the child was. 10When they saw that the star had stopped, they were overwhelmed with joy. 11On entering the house, they saw the child with Mary his mother; and they knelt down and paid him homage. Then, opening their treasure-chests, they offered him gifts of gold, frankincense, and myrrh. 12And having been warned in a dream not to return to Herod, they left for their own country by another road.

13And suddenly there was with the angel a multitude of the heavenly host, praising God and saying,
14 ‘Glory to God in the highest heaven,
and on earth peace among those whom he favours!’

16 ‘For God so loved the world that he gave his only Son, so that everyone who believes in him may not perish but may have eternal life.17 ‘Indeed, God did not send the Son into the world to condemn the world, but in order that the world might be saved through him.

Highlights: Includes Joseph emphasizing Emmanuel, Includes Mary’s Magnificat (recently decided that this should be essential for Christmas Eve as it tells why Jesus is coming), dovetails Myrrh/Communion also, ends with the Shepherds rejoicing/Joy to the World & Mary’s pondering/Silent Night

Prayer of Confession (Unison) Merciful God, we confess that we find your good news frightening and unsettling, especially when we consider its demands as well as its promises. Forgive us, melt us, mold us, remake us. Give us the courage to lay ourselves open to the wonder and healing of your coming. Be born again into our world, be born again into our hearts and lives. Hear now our silent and personal confessions as we prepare ourselves for your nativity. (Silent Confession)  Amen —–based on a prayer written by Rev. Lee Ann Higgins

Assurance of Forgiveness: Christ has come, love incarnate, salvation of the world! Know the Good news, Jesus Christ will be born this very night, and it is in him we are each, and every one of us, forgiven Thanks be to God.

All Children are invited forward to assist with the lighting (Note I let the children light the candles each week, basically youngest to oldest, we have about 12 kids and usually end up impromptu-ly including them all)

The Lord be with you

And also with you

Lift up your hearts

We lift our hearts to the lord

Give thanks to the Lord our God

It is right to give our thanks and praise….(prayer continues)

….and praying as his son taught us to pray……..The Lord’s Prayer (unison)

Our Father, who art in heaven, hallowed by thy name. Thy kingdom come. Thy will be done, on earth as it is in heaven. Give us this day our daily bread, and forgive us our debts, as we forgive our debtors, and lead us not into temptation, but deliver us from evil. For thine is the kingdom and the glory and power forever. Amen.

Bread & Cup: Communion will be taken by intinction, where congregants come forward and dip the bread in the cup. If you need assistance, the pastor will come to serve you individually.]

What do you call a group of angels

A drive of angels?

A flock of angels?

A flight of angels?

A herd of angels?

A herald of angels? 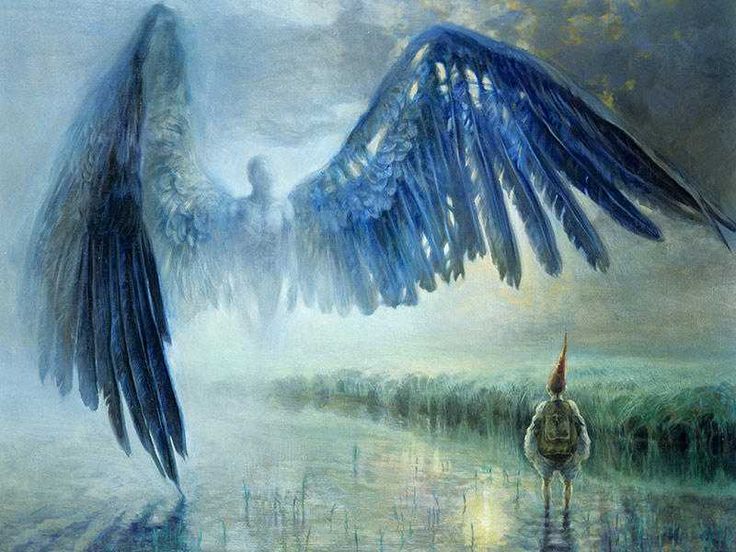 Touched By An Angel

We, unaccustomed to courage
exiles from delight
live coiled in shells of loneliness
until love leaves its high holy temple
and comes into our sight
to liberate us into life.

Love arrives
and in its train come ecstasies
old memories of pleasure
ancient histories of pain.
Yet if we are bold,
love strikes away the chains of fear
from our souls.

We are weaned from our timidity
In the flush of love’s light
we dare be brave
And suddenly we see
that love costs all we are
and will ever be.
Yet it is only love
which sets us free.

found at: Pristine Carteraturkus born in Philippines, lives in CA

In art we are once again able to do all the things we have forgotten; we are able to walk on water; we speak to the angels who call us; we move, unfettered, among the stars–Madeline L’engle