My almost 5year old has started a loving obsession of Dr. Suess. It all started when we saw a play version on Netflix. Now the first movie Franklin ever, ever loved was The Grinch that Stole Christmas (we saw it everyday for almost a year) so it makes sense that my “more mature” child now likes Cat in the Hat.

It was sort of a perfect storm of events though.

I had just done a play version of Charlie Brown Christmas (live) at my church, Franklin learned he loved plays, the play version of Cat in the Hat appeared. He then decided to act it out via paper props (which he made new ones every day complete with a skinny belt as a tail and at least 3 paper striped hats). Our house was full of crafty scraps for literally a month! He would spread out to make all his props–appropriately referencing the book of course (that’s our librarian’s child). Double, Plus Dr. Suess’s birthday was upcoming, and he re-found his book version of Cat in the Hat.

I have never been too big on Cat in the Hat. I’m more on the anxiety end of life (my family and I have a theory that you react to stress either with depression or anxiety–if your really luck you get both). Like I said, anxiety end–so when the cat appeared in the house, it worried me. And the character of the fish totally voiced all of my worries….which didn’t help..

However, Franklin, and the actor in Cat in the Hat, made me realize that the Cat in the Hat is just a mischevious child. It isn’t that he “isn’t listening” its that “he isn’t able to listen because he is having so much fun” and to me that is the essence of child.

My parents were out of town when our whole front lawn had to be redone due to some town plumbing issue (YAY for free new plumbing and free new front yard). After they dug everything up and before they planted the new yard, it rained…so naturally my brother and I ages 10 and 8year old had a glorious mud fight 🙂

My grandmother thought it was messy and gross…but we were like the Cat in the Hat, we couldn’t resist (besides I knew they would be replanting it anyway, but you know it was still mess and gross)….That and a snowball fight I started in 7th grade all contributed to my own Cat in the Hat moments. And you know what? They were great.

Yay Cat in the Hat!!

(by the by currently he’s starting in on Horten Hears a Who which does not have such a great version…but the story is awesome can’t beat  “A Person’s a Person, no matter how small!!!) 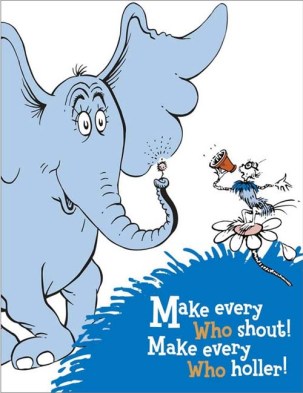 One Reply to “…why I now love Cat in the Hat”