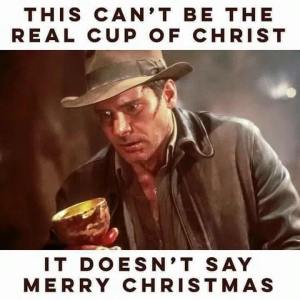 Apparently Starbucks selling coffee in plain red cups is seen by some as another sign of the so-called “War on Christmas.” And rightly so. How dare they crowd out Advent and Christmas with the color reserved for Pentecost? I only drink liturgically correct coffee.

(Above is a light-hearted post from a colleague of mine)

Did you know the liturgical color for Advent is actually purple or blue? And that the color for Christmas is just plain white (no doubt for holiness?)

The War on Christmas is not really a war and its not really about Christmas, its a culture trying to come to grips with how the world is changing

I worked in a Korean American church for a while. It was the melding between a 1.5 generation Korean congregation (those who are truly of both Korean and American heritage) +their young truly American, but ethnically Korean, children.

This congregation joined a regular small, had their heyday in the 1950s Caucasian Congregation.

I was on staff as the Christian Ed Coordinator, but realistically a lot of my job was translating.

Translating between the older Anglo-Christians, the Gen Y Koreans and the up and Coming Millenial-American-ethnically Korean Children.

Ruth, a saint and mother to us all at church asked me this when their Korean-American Pastor didn’t do them.

No, I said, thats an American Tradition, not a Christian one.

Then I explained that Advent differs from place to place (I’ve lived all over America) and that even the words are different and in different order, depending where you came from.

We did do Advent Candles, I was put in charge (as cultural translator) extradinare.

So the question is this?

What is at the root of this question about Starbucks (whose CEO is Jewish) and red cups?

As Christianity and Religion changes, as being American changes, perhaps we are asking the wrong questions.

And if people do things differently than you traditionally do…ask about it, learn about what people do and why.

And if you want to learn more, go to church, we have highly educated people, I spent 4 years at Princeton, who know about how things are done and why they are done that way, and how things are changing and why that’s exciting too…

Other thoughts on Red Cups

One thought on “The Anglo-American, Caucasian #Christmas, War on #Christmas & #Starbucks Coffee”