What a funny recitation, its as if we don’t believe eachtother that Christ was resurrection, as if its a surprise to us.

Its only sort of a surprise, it reminds me of a Stenta Surprise ( my husband and various members of that family)

The Stenta side of the family is not that good at surprises…they hate to be on the receiving end of surprises.

I tell my son we have a surprise for me huband

Something like, “I got a Phillies keychain for your dad, but Shh! Its a surprise

Surprises are funny, though, because they are about how you feel.

You can be expecting something, and still be surprised when it happens.

Ex: You are trying to get pregnant, and then SURPRISE! you are …

On the one hand you were trying to get pregnant…on the other hand that realization is a surprise.

The next day, that is, after the day of Preparation, the chief priests and the Pharisees gathered before Pilate and said, ‘Sir, we remember what that impostor said while he was still alive, “After three days I will rise again.” Therefore command that the tomb be made secure until the third day; otherwise his disciples may go and steal him away, and tell the people, “He has been raised from the dead”, and the last deception would be worse than the first.’ Pilate said to them, ‘You have a guard of soldiers; go, make it as secure as you can.’ So they went with the guard and made the tomb secure by sealing the stone. Matthew 27: 62-66 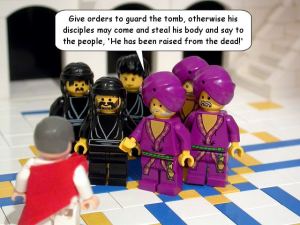 In Matthew’s verison, everyone knows that Jesus is supposed to rise from the dead….

After the sabbath, as the first day of the week was dawning, Mary Magdalene and the other Mary went to see the tomb. Matt 27:1 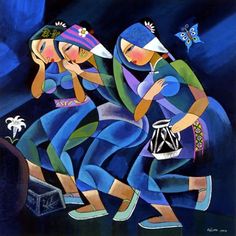 Some people even believe it

And suddenly there was a great earthquake; for an angel of the Lord, descending from heaven, came and rolled back the stone and sat on it. His appearance was like lightning, and his clothing white as snow. For fear of him the guards shook and became like dead men. But the angel said to the women, ‘Do not be afraid; I know that you are looking for Jesus who was crucified. He is not here; for he has been raised, as he said. Come, see the place where he lay. Then go quickly and tell his disciples, “He has been raised from the dead, and indeed he is going ahead of you to Galilee; there you will see him.” This is my message for you.’ So they left the tomb quickly with fear and great joy, and ran to tell his disciples. Suddenly Jesus met them and said, ‘Greetings!’ And they came to him, took hold of his feet, and worshipped him. Then Jesus said to them, ‘Do not be afraid; go and tell my brothers to go to Galilee; there they will see me.’ Matt:28:2-10

Even those who believe it are suprised by the appearance of Christ….

Why is that? I think its because, the faith journey is one of surprises. One where, in retrospect things make sense, but you believe and work at faith, but still can be surprised by just how amazing God is.

This is why its so hard to recognize Christ when he appears.

This is why, even though we hope & pray for it, we would be surprised if Christ showed up today.

And there is some kind of essence to this surprise/to this faith. This surprise is a part of who and what we are.

Yet here we are at Easter, and all of us have gathered at the tomb

to experience the resurrection

To tell the news to one another

He is Risen indeed

This conversation, the one we have to review yearly, monthly, weekly through worship, is the very conversation that makes church because God surprises us. God’s fullness cannot be witnessed in one mere human being. We think too small. Even in the Gospels we have not one, but many accounts of what happened to Christ. None of them are considered “wrong” instead, they are considered to give us some perspective and scope of who God is and just how full, deep and wide God’s love is for us.

This happens only as we witness too and share our experiences, in essence having the same conversation

Christ is risen? (eyebrows up)

Church is so that conversation (as opposed to becoming an echo chamber) becomes a rich and diverse reflection of who Christ is, and what Christ means for humanity

And that diversity, richness, depth of love and sacrifice–even though we saw it coming. Often God’s love takes us by surprise