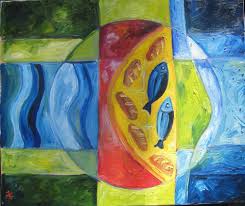 Right after Jesus Christ Feeds a Billion people (slight exaggeration) with some crumbs of bread and fish oil (again hyperbolically speaking)….* He then speaks of himself as the bread of life. One where he references the story of Moses, God and Manna… An often overlooked piece of this story is when they gather the bread (Ex: 16:17-18)
” The Israelites did as they were told; some gathered much, some little.18 And when they measured it by the omer, the one who gathered much did not have too much, and the one who gathered little did not have too little.Everyone had gathered just as much as they needed.” Here we have another miracle, just like the fishes and the loaves story, where everyone has enough to eat. It doesn’t matter how much they actually gathered, God provides.

In a Spiritual not religious world, I find this immensely comforting. In a world obsessed with Work (see this great: work as the new religion article here), in a world where expectation are often viewed as entitlement, in  world where “doing” things is more important than “being” things (ministry of presence, anyone? anyone? Bueller?)

Churches too often fall into the sin of work-righteousness: that’s the sin where you think what you do is more important than what God does for you, its the one where Pride literally goes before fall–from grace**. It is why church’s tend to emphasize programs instead of people, and quantity over quality of relationships. (As my mom says, better to be a great small church than the Mall of Churches where we try to do everything).

God promises that there is enough nourishment, enough measure for each of us.

When my grandmother was incommunicative from a fall, she also didn’t want to eat. Without, her (or our) consent the hospital put a feeding tube in

Here’s the thing, I believe that there may be a time when an older person doesn’t feel hungry anymore. Its not that they are starving (which truly is a horrifying image, which is why I think the hospital put the feeding tube in). No one wants to starve grandma. But I don’t think my grandmother was starving, I think she was full, full of life, nourished by God and done with what she wanted to do. She had, had her measure. And her years were different than my grandfather’s (who had died some years before), but although they worked a different amount of time, like the Hebrews, each of them got their measure of life. At times, I think we feel like people (especially children) didn’t get their full measure, how could they when their time was so different? But, somehow, God promises that they did. And so maybe people are accessing God differently, I know my parents weren’t following twitter, reading fantasy and publishing blogs as a part of their spiritual lives, but it doesn’t make my measure any more, or any less, than other people of faith.

So why church? Because its another way for us to find community and nourishment, when so often our shares seem to be different than everyone else’s, church means we get to share in the measures of faith others have, instead of just depending, worrying, keeping up with our own. It frees us to be varied and unique, to be communal and sharing in our measures of faith. So church then becomes part of our relationships , instead of a measure of our faith….

*despite the hyperbolic Katyisms, I totally believe this miracle actually took place…